Many years ago, back when we all paid for our internet by the hour (And it was $#@! expensive) and only weirdoes hung out on that funny interwebs thing – I was there!

You could post about yourself on special interest (shut up I mean knitting and .. stuff) forums.

And of course, as happens in any “community”, people would form friendships and hang out in the various chat rooms (where we used commands like //boot or o O (laughs) <– to this day I do not know why you do the o O (thing) but.. Yes well, we’ve established already that there’s lots of things I don’t understand.. 😉

I well recall the hilarity that ensued when people were in the room but clearly “PMing” each other and would forget to do the right command and a random “oh baby yes .. and I’m unzipping my dress” would appear in the scrolling text .. brilliant! And yes, we teased them mercilessly, til they ran away to another room.. Ah the good old days ..

I had a few adventures with meeting men via this medium and thought I’d share a couple of them with you. Some are not so bad, while others are somewhat wince-worthy!

The first guy I met was very bizarre, when I think about it. The way it transpired, I mean.

I called a help-desk in a tizzy one day after encountering problems with my internet connection. The guy who took my call was lovely. Funny, patient and more importantly: He fixed my internet, heck he could have had my kidneys and first born, I had an addiction and he sorted my fix.

There was (wait for it..) a connection 😉

During the course of the reasonably long help-desk call, Mr Internet and I added each other to our ICQ (I seek you .. I’m ashamed to admit how long it took me to work out what that stood for) and from then on we chatted often. Like I said he was funny .. and smart. Heck he worked on the interwebs after all!

After a couple of weeks he called me on the phone. And from here, the course was set .. Hours were spent on the phone each evening after work chatting til bed time.. What can I say? He gave great phone.

Then one day Mr Internet says: “I want to meet you”.

I was not really expecting it because, well .. people off the internet didn’t meet, that was .. weird. But I caved in after fielding several more weeks of his requests to meet.

Once I realised I was kinda thinking he might be ok (let’s face it, 4 hours a night on the phone you learn a whole lot about someone!) I suggested we should swap pictures.

I wanted to know who I was chatting with and figured he should have the same, so duly set to having some photos of me scanned and sized to be emailed..

Lesson learned: even back THEN (but especially now in this day and age of technology!) if a person does not offer you a picture there’s possibly a good reason!

He said he didn’t have any online and because I was younger and naive I didn’t really think anything of it. Sent him 2 pics of me and we kept on chatting .. Finally the day arrived when he was due to visit.

Call me a hussy but we had arranged that he would stay with me .. I had a big house and plenty of room. I guess in hindsight I should be grateful he wasn’t an axe murderer but yeah well that would have at least been .. interesting..

On D-Day, Mr Internet pulls up and knocks on the door. My heart is all a-flutter .. I’ll be honest – I was in a right state. The ladies who read my blog will well know the lengths I’d gone to in preparation for this auspicious event.. He lived 5 hours away and I’d spent every moment of his drive preparing!

I opened the door and my fluttering heart .. sunk..

He’d described himself as a “big tall bloke”. He neglected to mention he was as wide as he was tall. He squeezed his way thru’ my front door and grasped me to his sweaty, heaving man-boobs. Fighting for air I lifted my face up between his cleavage. 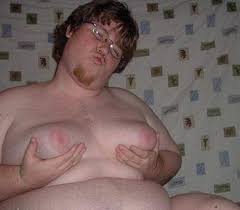 Fleshy.. moist, greedy lips adhered themselves to my prettily painted mouth as he proceeded to grope every part of my body in approx. 3.4 seconds flat .. all the while attempting to seek and destroy my tonsils with his tongue. Or he was after the gold filling I’d told him about in one of my back teeth..

Extricating myself from his sweaty embrace, I remembered my manners and invited him in. WHY I didn’t just throw him out then is beyond me cos oh really .. he was all things ugly rolled into one unfortunate man. He had greasy hair. He was dressed in an old black tee shirt and jeans. He had body odour. Bad breath. And he was 300lb at the very least .. and he wasn’t that tall..

But I invited him to sit down and went to pour us drinks (I drank mine in the kitchen then poured another right quick!) and went back to the lounge determined to be polite.

Only to find he had laid himself out on the couch with his jeans unzipped. Initially I thought maybe they’d busted due to his .. size. (Overhang, that is!) But no .. very quickly it was clear that he seemed to expect a nice-to-meat-you-blow job.

If this wasn’t the perfect time to kick him out, I dunno what was ever going to be. But I’d invited him and I felt .. well heck who are we kidding – I couldn’t throw him out if my life depended on it, he was twice my size lol

After suggesting to him that maybe he sit up and drink his drink (and very clearly setting his mind straight on the lack of welcome-BJ) my brain kicked into gear and I fired off the “save me” text to my gal-pal. The deal we had was that she would call me with an emergency that ONLY I could help her with, should the need arise.

As we know, it wasn’t only the need that had arisen! I needed rescuing!

Minutes later, my phone rang, a one sided emergency phone call was held and next thing you know I have to leave town to go and visit a dying friend. Actually, I don’t recall the line I fed him at this point, I was just so relieved to get the hell out!

It does get worse: He offered to come with me to my friends’ place. And I can’t really blame him, after all – he was 5 hours from his home but I just didn’t care. I locked my house up (he only left it to follow me, else I have NO idea how I’d have gotten him out) and drove off telling him there was a motel down the road if he needed one.

How does it get worse?

He emailed me when he got back home. Saying he’d fallen madly, wildly in love with me and our meeting – albeit brief, had merely served to confirm his love for me and he wanted to move to my town and be with me, happily ever after.

Idea sort of stolen from this blog – thanks for the inspiration, ladies!